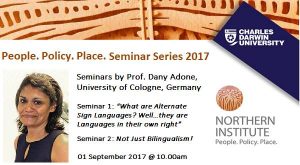 Seminar 02: “What are Alternate Sign Languages? Well…they are Languages in their own right”